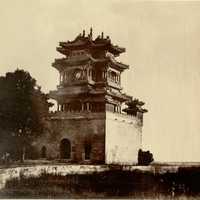 Works by Felice Beato See all item sets with this value

1885 See all item sets with this value

It was believed that no images from this period of Beato's career survived but The National Archives holds about forty of his photographs taken in Egypt and the Sudan and registered at Stationer's Hall for copyright purposes in the autumn of 1885.

The pictures show troops (made up of nationalities from across the British Empire) crossing the desert, the tribes they encountered and the towns they passed through on route.

The expedition arrived at Khartoum too late to relieve General Gordon who had been killed two days before. None of Beato's photos appear to show the expedition's arrival in the city.' (TNA, Flickr album description)

Rights to COPY 1/373 are reserved by The National Archives (UK).
Image reproductions from TNA
Images released by TNA on Flickr may have additional rights information attached - see individual images for details.
Flickr statement on copyright and licences